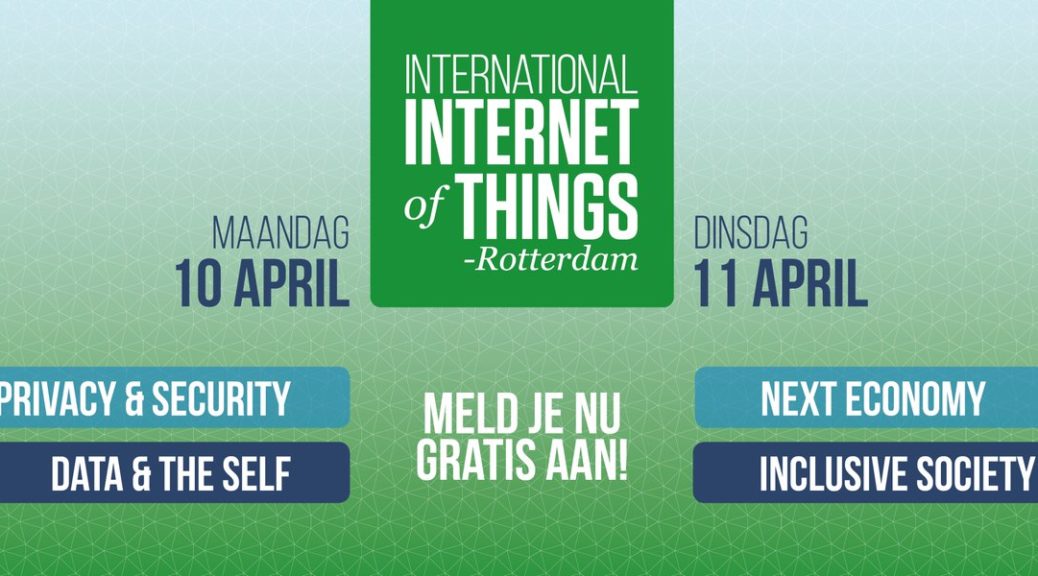 These last two days I were the internet of things day(s) in Rotterdam. Sadly I could only go one day, and here’s what i learned.

The first day was about Privacy & Security and Date & The self, we started with an introduction lecture from Lorna Goulden, called; “Iot: Are we being smart?” She talked about the value of things on the internet and that are connected to it. The internet once was made to give us insight but lately we’re giving it more insight, by putting all our data out there. She showed a part off the video underneath, where they explain the internet of things, where there are almost more things connected than people.

Lorna says that the thing give the internet data but what is even more important is the people. So to make the internet of things relevant we need to change the way we think and most definitely the way we create. We need to design it for the users, make everything understandable and adjustable for them. If we let the user be creative on/with the internet, stuff can be created that right now we can not even imagine.

But that is of course all the good for the users, there is also the bad, she calls out adblocker en advertising. What makes me as a advertiser think “are we the bad guys of the internet?”. Do I as advertising need the think on a way that people don’t say advertising as a bad thing. For me I feel that power lies in giving people the most insight of what we’re giving them and why. With data and the internet of things we can make advertising is little annoying as possible. The funny thing is after disliking advertising Lorna talks about this new privacy policy where the government is working on; GDPR (general data protection regulations), it’s a new law that will protect our data. Than she tells us how she thinks that user should get more insight on the data that is taken from them. She refers to the book “Weapons of math destruction” by Cathy O’Neil. The book is about most of us dont understand algorithms but they do start controlling our lives. She show’s dis video underneath the perfectly shows how the algorithms do that and how we can change that around for the better.

So a thing that I think is already important for my graduation project is showing the user how my algorithm works. How it collects data, how it makes choices and then put them into action. For me is giving that kind of insight to user was already very important, but hearing it from a person who knows way more of the internet gave me a feeling that I was on the right track and I need to put my drive into my work.

She ended her presentation with people trying to cheat the internet, starting of with a story about a primary school where kids got bracelets that tracked there stepps. And every 1000 steps a amount of money wash donated to kids in africa. So when the interviewer came to the school to see how the kids were doing, the kids found lots of ways to cheat the system. The children he talked to were waving the hand with the bracelet on it, and some actually made little machines from lego that shufelt the bracelet along. The kids were eager to help the children in africa but not by being more active like planned, but by being very creative. The last example Lorna gave was maybe the best. It’s this video of a elderly men how needs to watch his health, in order to do that his kids gave him all kinds of smart stuff that will track his habits when they’re not there, and well that didn’t worked out as planned.